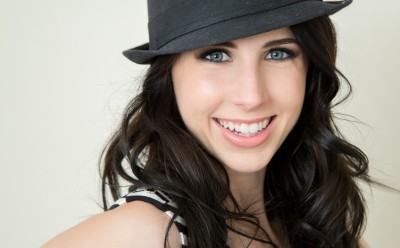 Adventure Chic is a high maintenance girl’s guide to packing light; a blog full of travel tips and ideas for looking fabulous on the fly. Created by Emily London after two polar opposite events: first – a nightmare travel experience caused by too much luggage, soon followed by an epic backpacking trip through Europe that answered the age-old question of fabulous travelers everywhere. “Can I look chic and lovely if I only bring one suitcase?” The mission of this blog is to show how.

Emily is a 27-year-old designer, makeup artist, photographer, ukulele enthusiast, and world traveler. She’s also a mother of two (a five-year-old girl, and eight-year-old boy), and has been married to the same smokin’ hot man for nine years.

As a child, Emily lived the dual life of an ex-pat living in Asia, and a homebody living in Happy Valley, Utah. At age three, her family of six moved to Manila, Philippines so her father could pursue an international career in marketing.

Emily’s adventurous nature must have come from her mother, who, back in the old days before internet (!) moved to a foreign land, with no inclination to learning languages, four very active children, and a rocky marriage. Not only did she live there, but she loved it. Embracing the opportunities available to her, she learned to SCUBA dive, went swimming every day, and made fast friends with locals and ex-pats alike.

After four-and-a-half years in Manila, when Emily was seven, her parents decided to part ways and get a divorce. Mom moved to Utah, where she was able to pursue a college degree. Dad got promoted and moved to Taipei, Taiwan. At that point, Emily and her siblings spent as much time with both parents as possible. Considering the ‘opposite sides of the world’ dilemma, what resulted was a kaleidoscope of school years, summers, and Christmases all rotating from a privileged, structured, international experience with Dad, to a whimsical, homey and carefree time with Mom.

Her father later moved to Shanghai, China where Emily was able to live for one life-defining year at age 14. But, after 15 years of working in Asia, he decided to quit his job, buy a company, and move to California. At that point, Emily was in high school, and lived exclusively with her mother and step-dad.

When Emily was 17, and a Junior in high school, she met Mr. Hottie Biscotti, a very dashing 24-year-old. Emily was instantly smitten, but because of their age gap, she had to work hard to woo her reluctant sweetheart. She eventually wore him down, and they dated for a year-and-a-half before getting married. A new wife at 18, she justified such an early marriage by saying, “Oh, we’re waiting five years to have children.”

Surprise! Baby number one came 10 months after the wedding. Baby two came three years after that. Mr. H.B. finished college and got a job as a computer engineer. Emily started an online company designing wall quotes and decals. After the company took off, Mr. H.B. was able to quit his job and work from home with Emily. This has allowed them some freedom to (finally!) travel.

By age 26, after phasing herself out of their vinyl lettering company, Emily was ready for a change. She began training as a photographer, while simultaneously taking makeup artistry courses. Using both skills, she created a Contemporary Glamour Portrait Studio. Enthusiastic about the possibilities for taking her photography abroad, she’s currently learning French and dreaming of baguettes in Paris.

Disclaimer: Adventure Chic participates in affiliate programs which may result in a commission when you order items linked from this site. Even so, I only link to products that I myself have used and enjoy. -Emily

Beauty on the Go

Look polished and beautiful on your travels while toting only the barest of essentials.

How-to pack only what you need and look put together no matter where you go.